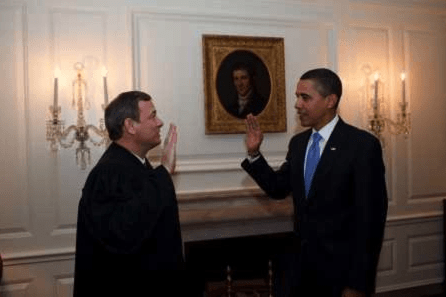 The Recording was made by Wes B. Allison.

This article appears in The Tampa Bay Times.

On Barack Obama's first full day in office, oaths were something of a punch line. During the elaborate inaugural ceremony on the West Front of the Capitol, Chief Justice John Roberts had flubbed Obama's oath. Attempting to recite it from memory, Roberts tripped over a word or two and got the sequence slightly out of order. The following day, working for the Tampa Bay Times, I happened to be the print pool reporter, who stays near the president throughout the day
filing reports for the rest of the White House press corps every time something happens, no matter how picayune. In the early afternoon, I was inside the Old Executive Office Building, next door to the White House, where Obama was standing by as his new vice president, Joe Biden, prepared to swear in the senior executive office staff. Biden asked for a copy of the oath to read. "My memory's not as good as Justice Roberts'," he cracked.

I had actually missed the mistake. I may have been "inside the bubble" on Jan. 21, but on Inauguration Day I was far, far outside it, a good mile east of the rostrum at the Capitol near the Washington Monument.

I was freezing my toes off with a Boy Scout troop from Wilmington, Del., and a jubilant church group from central North Carolina whose members just could not believe a black man named Barack Obama was now the president of the United States.

Even with the jumbo TV screens stationed along the National Mall, it was difficult to hear Roberts over the calls of "Amen!" and "Yes, we did!" echoing through the crowd.

But later, as people thawed out and began unpacking the day's events, you could feel the beginnings of a little buzz. Did the oath count? Was Barack Hussein Obama really legit?

For the political right, which harbored a deep distrust of Obama, that was always a great question.

The oath:
Having covered the 2008 campaign for the Times, I never really believed the antipathy the right felt toward Obama was motivated chiefly by race. Race amplified it, sure, but it was more that with his Kenyan daddy and Muslim stepfather and exotic upbringing in Indonesia and Hawaii, coupled with his quick rise to power, Obama's background fueled the fire that conservative leaders in politics and the media had successfully stoked in previous election cycles: that our one nation, under God, indivisible, is really two nations — Us, the real America, and Them.

For the conservative movement, Barack Hussein Obama was a fantastic symbol of Them. He was both an urban black and an Eastern intellectual elite. He was desperate to break free of the stagnant politics of the civil rights era, yet heavily dependent on black voters to win. His name sounded as if it belonged to someone who was trying to kill us. And where was he really born anyway?

In his new book The Oath, Jeffrey Toobin uses the flubbed swearing-in as a metaphor for the coming contretemps between Obama and Chief Justice Roberts, two relatively young, brilliant, ambitious leaders of co-equal branches of government whose worldviews collide rather than intersect. See?
Even their first meeting was contentious.

At the time, however, the effect of Roberts' innocent mistake served the baser purpose of adding one more question mark to Obama's legitimacy. On Obama's first day, reporters outside the bubble were calling me with rumors of a possible do-over, just to set the record straight. Nope, the White House staff told me when I asked, more than once. There was no question the oath was legit.
On one hand, the whole idea of a do-over seemed pretty dumb. President Obama and his family had moved into 1600 Pennsylvania Ave. and presumably had switched the cable and power into their names. The first lady was planning to redecorate. President Obama was free to watch SportsCenter on the presidential TV from the presidential sofa while drinking the presidential beer. He was shadowed by the presidential press corps, the presidential Secret Service detail, and a guy with a briefcase containing the codes to a nuclear arsenal capable of destroying the entire world, even New Jersey.

Was America set up so that the chief justice could mumble a few words and undo the doings of the Electoral College, whatever that is? Of course not. Was Barack Obama the president of these United States? Of course he was.

And yet …
Abundance of caution
By 7 p.m. of Obama's first day, I was fully immersed in the glamorous life of a White House correspondent. I had been there 12 hours, had eaten only a small bag of pretzels, and had typed up a half-dozen lengthy reports noting everything from the color of the kerchief peeking out from Biden's suit jacket pocket (white) to the number of stanzas of Holy, Holy, Holy the Obamas had sung in church (four) to whether Obama had put his hand on his heart while singing the national anthem and if he was wearing a U.S. flag lapel pin (yes and yes).

Every time the door opened to the James S. Brady Press Briefing Room — which housed a swimming pool built for FDR until the Nixon administration — a blast of icy air shot through.
Then Robert Gibbs, the press secretary, summoned the print pool — reporters from the AP, Bloomberg and Reuters and me. We followed him through a door into the West Wing and up a small flight of stairs, then stopped in the hallway. Gibbs pulled out a sheet of paper. This is a statement from White House counsel Greg Craig, he said. "Out of an abundance of caution …"

Minutes later we were ushered into the Map Room, so called because it was where Roosevelt followed troop movements during World War II. Obama was already there, lounging on a couch. He got up and wandered over to make small talk with the pool while Roberts donned his robe.
"Are you ready to take the oath?" the chief justice said.

"I am," the president replied, looking somewhat amused. "And we're going to do it very slowly."
There were no crowds, no TV footage, no amens. Just the official White House photographer, a handful of staff and the four of us from the print pool. I punched "record" on my little Panasonic recorder and started furiously taking notes.

The men took their place in front of the Peale portrait of Benjamin Latrobe, an architect of the Capitol, and Obama raised his right hand. He didn't use a Bible and Roberts didn't use a script. The oath, take two, took just 25 seconds. Roberts was flawless.

"Congratulations again," he said, smiling, and shaking the president's hand.
Obama smiled, too. "Thank you, sir."
That recording I made? Turns out it's likely the only complete audio of this moment in time.
Four years on
Through nearly 20 years in journalism, I always tried to be mindful of my place on the front row of history. So what was the legacy of this event?
The short-term answer is the fact that it happened, that it had to happen, showed that even though Obama had trounced Republican John McCain, there remained a general sense that many Americans were unwilling to accept him as commander in chief.
Had McCain won, and had Roberts flubbed the oath in exactly the same way, I do not believe I would have spent his first day covering a mulligan at 7:35 p.m. It would have been a funny story, not fodder for rumors that the president wasn't the president. But Barack Hussein Obama? He needed the mulligan.
And what about the long-term legacy? The long-term legacy is that, four years and a re-election campaign later, we as a nation have gotten past the silly questions about whether Obama is "legit."
The right may not like him still, but except for the occasional clownish eruptions by the likes of Donald Trump, the questions about Obama are questions we should always be asking about our president — whether his policies are right for our country. I have no doubt that on Monday, Chief Justice Roberts' recitation of the oath will be flawless. But if it is not, I am also pretty sure he won't have to do it over.
Wes Allison reported for the Times from 1999 to 2009. He is now a lawyer with the Kahn Law Firm LLP in Charleston, S.C.

Hear the second oath
Wes Allison's recording of Barack Obama's second oath in 2009 is considered to be the only complete audio of this historical moment. Listen to it at links.tampabay.com.